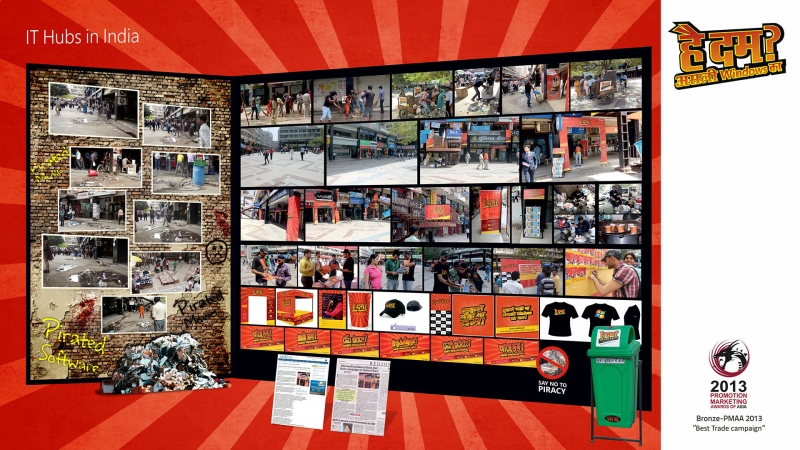 Brief:
Back in 2012, the piracy menace in India’s largest IT markets grew to colossal proportions. Nehru Place which is recognized as the largest IT Hub in Asia became the largest piracy hub. Led by Nehru Place, other IT hubs were also fast losing their credibility and even worse – losing consumers. With bad press coverage and unreliable buying experience scaring the consumers away, sales dropped sharply, Microsoft wanted to clean up the menace of piracy.

Solution:
Hai Dum? Asli Windows Ka? emerged as an innovative campaign that transformed consumer perception about the IT hubs via a complete visual makeover of the IT hubs and achieved an improved brand health for Windows. It also involved a makeover in the approach of retailers and a positive makeover in the information passed on to the consumers. This three pronged strategy, with a strong channel-partner tie-in, was directed towards making Nehru Place a cleaner, honest and consumer friendly IT hub. The task at hand was a mammoth one which had the government authorities, retail associations, the municipal commission, retailers and Microsoft come together to turn around the image of this IT hub.

Results:
Hai Dum? Asli Windows Ka gave IT hubs in the country a makeover at various levels – bringing about a change in the approach of retailers and gave a positive makeover in the information disseminated to consumers. This herculean initiative saw participation and collaboration of government authorities, retail associations, municipal commissions, retailers and Microsoft, with a view to turn around the image of IT hubs and save business while regaining consumer trust by battling piracy. The measure of success of the ‘Hai Dum?’ campaign lies in the fact that not only did the campaign gather positive reactions from the press but also resulted in a direct increment in sale.