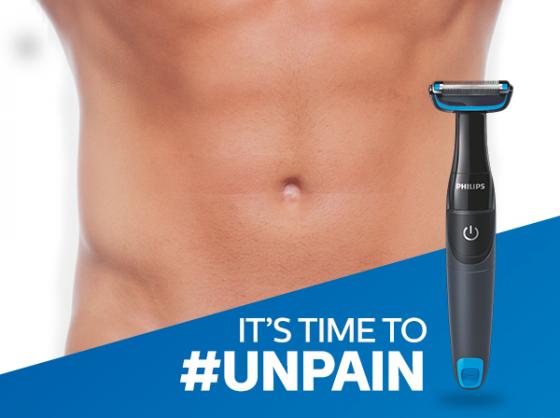 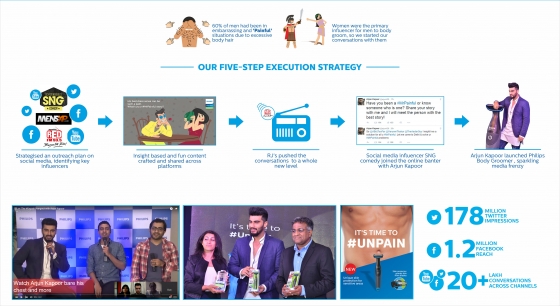 India is the world’s largest youth economy with 50% of its population under the age group of 30 years. Body grooming is an untapped opportunity in India and a sensitive topic that men don’t discuss openly with their peers or partner. Online searches show body grooming as a topic, consumers want more information on, but have no reliable source for. Men prefer to unanimously converse in forums or outside of their circle of influence making it difficult for any brand to reach to them.

More than 85% men use manual tools like blades designed for the face, hair removal creams (implied for women), scissors, or non-dedicated electric devices for manscaping. Key barriers for electric body grooming were low awareness of electric grooming solutions, lack of understanding of its superiority over a manual tool as it’s a safer solution.

Our aim was to reach out to consumers and influence their behaviour by enabling adoption of an electric body grooming solution. The key objective was to Position Philips Body Groomer range as the one stop solution for safer manscaping by creating awareness, education and conversation about its superiority as it and protects even the most sensitive areas without leaving a nick or cut.

Our research across men and women, assessed male body grooming woes and how women reacted to their partner’s painful body grooming habits.
Key insights that came to light were-

Our strategy was to reach out to men who were in the hiding and bring them out of the closet by creating insight based and fun content and conversations.

Body grooming had become a constant predicament for men, causing pain and embarrassment to both him and his partner. Women and men thought a guy who doesn’t body groom is basically a ‘Pain’.

Innovation met excellence with creative content around #MrPainful being shared across multiple online channels to create hype for the campaign.

#MrPainful is a guy who inflicts pain and embarrassment on his partner with his inconsiderate habits and traits like overconfidence, bad dresser, body odour, fake accent, lack of personal hygiene, lack of body grooming etc. The idea was to surprise, intrigue and engage the audience, prompting them to share their #MrPainful stories.

We followed a five-step execution strategy for the body groomer launch campaign. First step towards the executing the strategy was to carefully construct outreach plan on social media, youth platforms and identify social media influencers, bloggers and RJ’s to create conversations that intrigue, excite and surprise the audience.

The second step was to creatively design, insight based yet fun content in the form of GIFs, posts, videos, articles and infographics. The content was shared across Facebook and Twitter depicting different traits that make a man #MrPainful, prompting women to share their stories. Research based fun and informative Infographics were shared on social platforms, highlighting the key insights on body grooming. Funny and brutally honest VOXPOP videos were shot, telling men, what women thought of their man-jungle. Rib-tickling articles were published on popular youth entertainment forums like ScoopWhoop, MensXP and by women bloggers.  The conversations made a lot of noise leaving the women amused and men confused, making the topic an online rage.

The third key step was to reach out to famous RJ’s across India to push the conversation to a whole new level. Female RJs asked women to share their #MrPainful stories and male RJs expressed their confusion and wondered what this #MrPainful babble was all about. Numerous entries and stories poured in.

In the fourth step social media influencer SNG Comedy was identified as they have a high influential and conversational value on Youtube and Twitter. They picked up on the trend and started sharing their take and funny incidences around #MrPainful. Philips brand ambassador Arjun Kapoor joined the online banter with SNG comedy to create fun and viral content. Arjun decided to put an end to every man’s dilemma and announced his immediate arrival to Delhi to help men from being #MrPainful. The conversations left men glued to their seats.

The final step involved preparing for an extravagant media launch of the all new Philips Body Groomer. Arjun Kapoor launched the product at fever pitch, sparking media frenzy and creating ripples of excitement and conversations. Arjun told men how their old body grooming habits were a pain and that it was time to #Unpain with Philips Body Groomer. Post the launch a #Unpain with Arjun Kapoor Hangout along with SNG Comedy was hosted live, addressing amusing hairy tales from the audience and telling men to #Unpain. Extensive radio promoted the event and media across google networks boosted the hangout. Consumer interaction reached new heights with both men and women sharing their take on #Unpain.

Radio-on-board, a studio shift by 93.5 Red FM was done in Ambience Mall wherein RJ Swati conducted a live show from the mall while interacting with the audience and creating conversations around #Unpain. Counselling booths for men were installed in malls across top 3 metros in India addressing and putting an end to all body grooming woes of men, turning the affair into talk of the town.

The campaign observed an overall increase in chatter, from zero discussions around body grooming, the conversations reached 20+ lakhs, making body grooming a ‘No Taboo’ topic. The ripple effect translated into a massive sales uptake in seasonal sales YoY.The campaign resulted into receiving unique and engaging content across online platforms, amplified engagement and enhanced shareability around #MrPainful and #Unpain. Buzz around #MrPainful and #Unpain reached a nationwide high, trending nationally and gathering 178+ million Twitter Impressions and 1.2+ million reach on Facebook.

This integrated marketing campaign used the power of content marketing, social media, radio, on-ground engagement and events, also making the best use of viral marketing to create brand awareness, influence product adoption and create a winning mix for the brand. The message was loud and clear – Take care of your man garden and… ’Stop being #MrPainful, it’s time to #Unpain with Philips Body Groomer’.