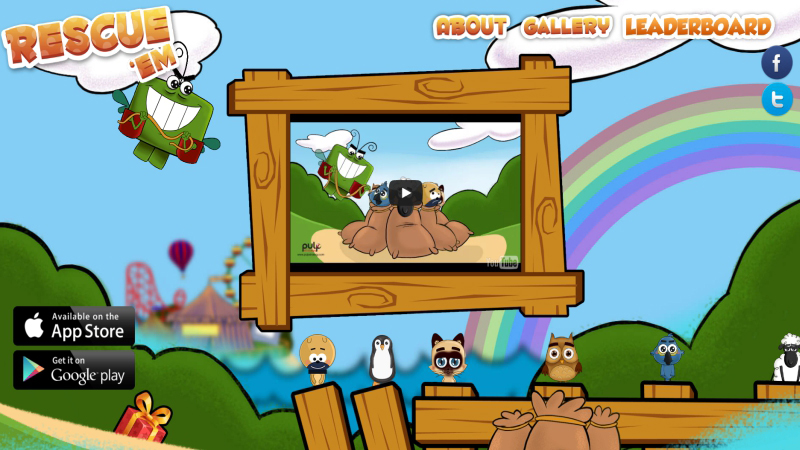 Rescue ’em packs the excitement of being at a carnival with a mission of rescuing adorable creatures suspended by rope. The colourful background, cute characters, smooth interface, and simple tap to play make the game attractive to all age groups.

As the characters tied by the rope move from right to left on the screen, random items such as mushrooms, candies, bombs, gift boxes, and rotten eggs appear on the screen – each with their own characteristic that lends a different flavor to the gameplay.

A simple tap on the character releases a boomerang that unties the character. Along with that, you can also fetch candies to add to your game points, and collect gift boxes to revive lost lives.

Rescue ’em is an iOS and Android based game that bundles the thrill of being at a carnival with a mission of rescuing cute animals from the fierce claws of a villain named Brutus. The game revolves around the story of adorable animals from Frolic Island who were abducted by Brutus – a mean merchant who roams from island to island to abduct and sell cute animals at Carnival Island. The game is built on iOS, Android with Cocos2dx, C++, JAVA, Objective C as the scripting language. MySQL database and PHP as the server side coding language was deployed at the backend. The tools were the Pencil Wireframing Tool, Just in mind Prototyping Tool and softwares like Photoshop, Illustrator, Invision and AfterEffects.