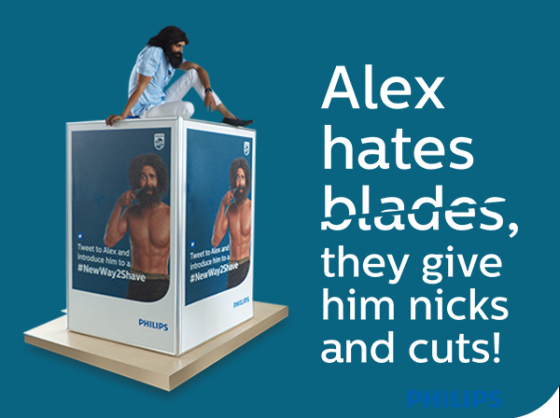 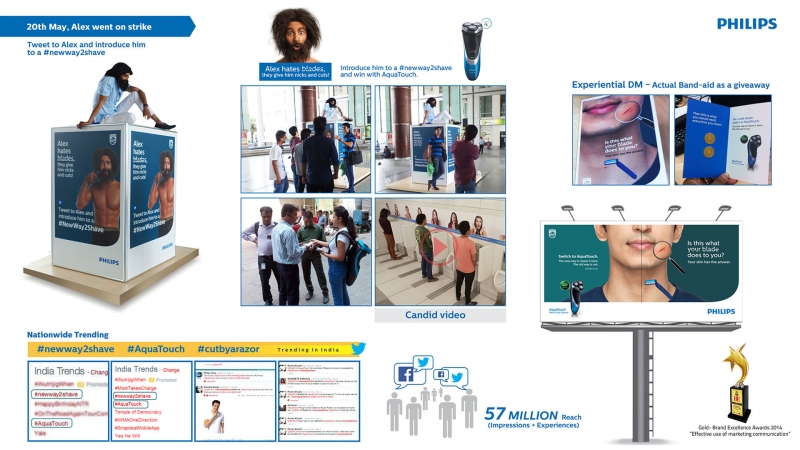 Brief:
India is primarily a wet-shaving market and men are accustomed to traditional razors. Research showed 53% of men worry most about nicks and cuts and the damaging impact of shaving on their skin. Our objective was to change consumer behavior by introducing them to a new way to shave with Philips AquaTouch. We reached out to our Indian audience of urban young and regular shavers, for whom looking good and making an impression in life is important. The strategy was to address the fear of being cut while shaving and trigger a shift towards a better, safer way to shave.

Solution:
Identifying the key pain areas (skin irritation, nicks and cuts), which lowers a man’s confidence; the razor was established as a tool responsible for damaged skin. The campaign led by a trick question in a tone sprinkled with sarcasm- ‘Is this what your blade does to you?’ The creative solution translated into a series of unique, attention-catching live-stunts, engagements and installations, which triggered social media conversations and amplification. Our strategy was to create engaging, relatable, insight based yet fun conversations that led our audience to tell us about why they should switch to AquaTouch. Young men are sensitive about their appearance, working hard to make an impression. Shaving cuts ruin their day and their skin. This insight drove our campaign and established affinity. Alex our fictional character went on a public strike refusing to shave and women gave out bandages on streets as our audience tweeted about #newway2shave in a bid to get Alex to switch to #AquaTouch. Consumers began sharing their embarrassing #cutbyarazor moments. Installations in men’s washrooms created buzz, a hidden camera video went popular. Conversations circulated around the taboo topic of cuts by a razor and benefits of switching to AquaTouch.

Results:
‘Alex’ on strike in 3 states generated 1.3 million conversations on a single day, #newway2shave and #AquaTouch were trending at number 1 and 3 nationwide. The campaign generated 57 million impressions leading conversations which reached out to 60 cities across India. We had consumers fully engaged as they publically spoke about their embarrassing #cutbyarazor moments on social media, and as we saw #cutbyarazor trended on Twitter across India. Impact of the campaign resonated in conversations that reflected more consumers than ever switching to AquaTouch.